With a busy fall semester ahead I can now look back at a productive summer that included the completion of my Violin Concerto No. 1 and the premiere at the Grand Teton Music Festival of my String Quartet No. 1: Shades of Night.

The GTMF musicians performed beautifully and I am eternally grateful to them for bringing this work to life. I look forward to sharing the audio from the premiere soon!

The Violin Concerto No. 1, which will have its premiere in Berlin on March 6, 2019, is now with an excellent and capable copyist, Doug Biggs.

Now I can focus on a new work for A Far Cry and Lorelei Ensemble. The text for this work comes from a new translation of the Homer’s The Odyssey by Emily Wilson. I am just beginning to explore this material and I look forward to writing for these excellent musicians. The premiere will take place at New England Conservatory’s beautiful Jordan Hall on May 17, 2019.

Incidentally, Violin Concerto No. 2 has already been commissioned by the Dallas Symphony Orchestra for their principal 2nd violinist, Angie Fuller-Heyed, who premiered my String Quartet No. 1 (pictured above). It was such a pleasure to work with Angie and her colleagues this past August, and the time working together will be incredibly helpful when I begin the violin concerto for her. I tend to write works for specific people rather than an instrument or an ensemble. Getting to know a soloist, conductor, or performers is, for me, vital in the creative process. As is visualizing the physicality of playing a particular passage, especially in a concerto setting. Violin Concerto No. 2 is scheduled to be premiered sometime in the 2020 – 21 season.

Also in early May I recorded my Clarinet Concerto: Adrift on the Wine-dark Sea.This work, which I am very excited about, will be released on Kinan Azmeh’s CD sometime this fall. More details soon.

Also in April and May, I orchestrated 60 minutes of music of Olivier Deriviere’s beautiful score for a new video game titled, 11-11 Memories Retold. I also had the distinct pleasure of attending the  recording session at Abbey Road Studios in London with the Philharmonia Orchestra, who are one of the finest orchestras around. This was my third time working at Abbey Road and it is always a thrill, and I always learn so much from working with such an excellent orchestra.  I’ve not orchestrated music for anyone other than Olivier, as I don’t have the time to do so.  Olivier is a friend and a colleague and, as his regular orchestrator dropped out at the last minute, he was in a bit of a bind. The fact that the gig comes with a few days in London is an incentive as well. On this trip I was able to make a pilgrimage to Benjamin Britten’s home in Aldeburgh. It was a fascinating and inspiring visit!

In other news, I am very happy to announce that I’ve signed a contract with the Grant Park Music Festival in Chicago to compose a 15 (or so) minute work for choir and orchestra for their 2019 summer season, which will commemorate maestro Carlos Kalmar‘s 20th year as music director at GPMF. I’ve chosen text by Walt Whitman after extensive research that included reading an informative but frustratingly meandering biography by Justin Kaplan, as well as reading most of Whitman’s Leaves of Grass. 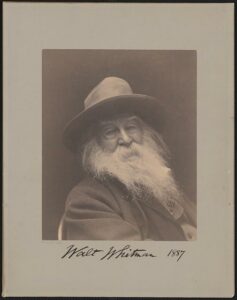 As it turns out, 2019 will be the 200th anniversary of Whitman’s birth, which was on May 31st. The themes of the text I’ve chosen are from Whitman’s writing on social justice, corruption and democracy. More on this soon…